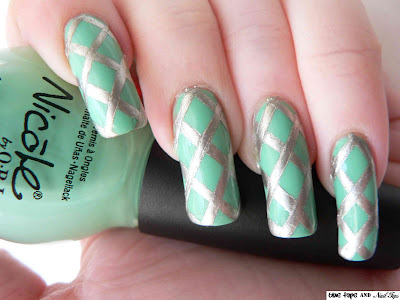 And my little garden lattice. 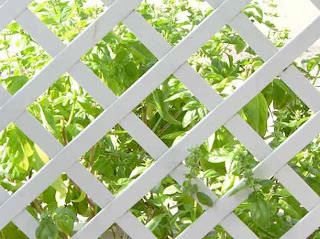 And the lacquers used in this garden party: 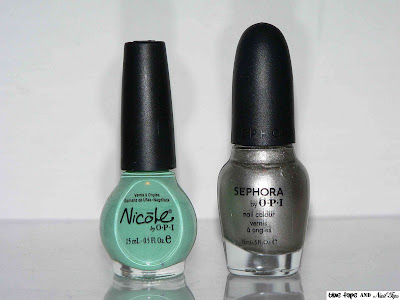 Nicole by OPI's Peas and Q's is a nice mint green that is somewhere in the shade range between Revlon's Minted and Opi's Damone Roberts 1968, leaning more towards the yellowish side towards Damone Roberts, as opposed to Minted's blue-er shading.

Sephora by OPI's Queen of Everything is a metallic silver polish that is almost pewter in shade. I found it was a good shade for this manicure because it complemented the mint green shade of Peas and Q's well, giving the manicure an antique look. 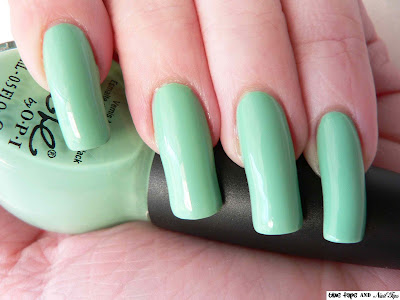 Step 1 is simply laying down the base color: Peas and Q's from Nicole by OPI. This is two coats followed by a top coat. I can't say I've tried any other mint polishes, so I'm not sure how well they work, but two coats was enough for complete coverage from this polish.

Step 2 is where the blue painter's tape comes in. (Photo can be enlarged when clicked on to see the details.) 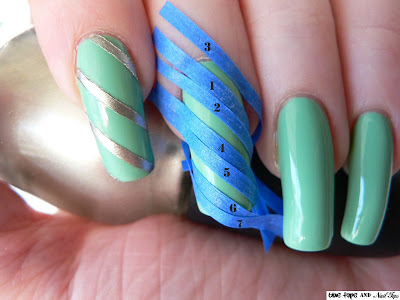 If you look closely, you can see each piece of tape in the above photo has been numbered. In order to get a consistent look on each nail, I planned where each strip of tape would go and at what angle it should be placed, so I could replicate it on each nail. The placement of each strip of tape is based on your own personal preference, but I started with Strip 1 (the strip of tape numbered 1) placed at the beginning of the nail bed where the silver stripe of polish that would be put down would begin at the vertical center of the nail bed. Strip 1 makes up the bottom border of the first silver stripe on the nail.

From there, I laid down the second strip of tape with a little overlap on Strip 1. I did this before placing Strip 3, so I could judge how wide the gap between each silver stripe of polish would be. I then laid Strip 3 (the top most strip of blue painter's tape) down, judging how wide the gap to fill with polish would be in comparison to the gap in between the silver striping, remembering that the silver stripes have to be thin enough so that the silver lattice that will be over the mint background does not completely overtake the background polish.

Keeping in mind the size of the gap between Strips 1 and 3, begin laying down the other strips of tape until your whole nail is covered. Remember to press down on the tape strips to keep the second color of polish from spreading under the tape and leaving a mess. Do this process one nail at a time until Step 2 has been completed on all the fingers you wish to use this manicure on.

Step 3 can be enlarged to see detail. (The detail is that little tiny star at the top of the nail bed.) 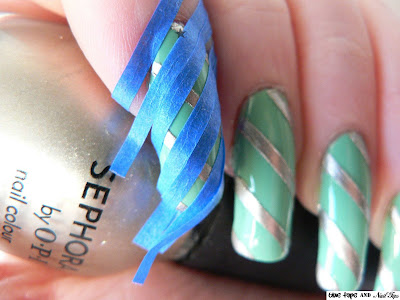 Step 3 is a repeat of Step 2, except you have flipped the direction your silver stripes will be going in to the opposite direction. (Click the image to enlarge it.) The tiny star that is present on Strip 1 of the tape (refer to Step 2 to get a refreshment on the number order of the tape strips, if needed) meets the first silver stripe on the nail bed, where Strip 1 and the silver stripe make a 90 degree angle.

Following the same pattern of how you laid down the tape strips in Step 2, lay down each tape strip, remembering to have the tape pieces that mark off the gap where the silver polish will go parallel to each other, so the striping stays even. 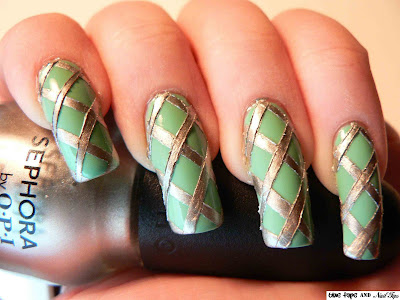 After you have completed Step 3 on all the desired nails, your nails will look like the above picture (especially if you have used the same nail lacquers). To get a "clean" look and to make sure the manicure and all the layers of polish stay put, put a layer of top coat on your nail once you are sure the second color of polish is dry.

And this is the final look! It is a bit more time consuming than some of the other Nail Designs I have shown, but if you try it, I can assure you that you won't want to take it off! You can even go a step further to add little gemstone decals if you like at the points where the silver striping meets. One...or a bunch...or none at all to keep the look more simplified.

Thanks for stopping by and checking out this nail design! I hope this tutorial has been helpful.
Posted by Cyan at 7:51 PM