No...nothing to do with the candy. Nail Design 7 is the Starburst Design. 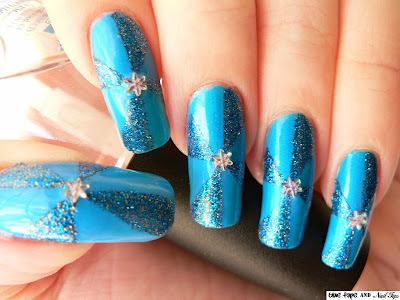 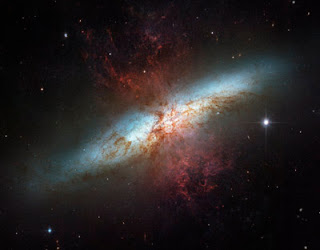 image from hubblesite.org
Although, this design looks more like the starbursts we come to know from graphic design that look kind of like flat pinwheels.

image from webdesign.org
This is a great design to try out one of those amazing glitters from the OPI Burlesque collection that are set to release in stores in November (or are currently available online). Though any glitter polish or other layering type of polish will work for this manicure! 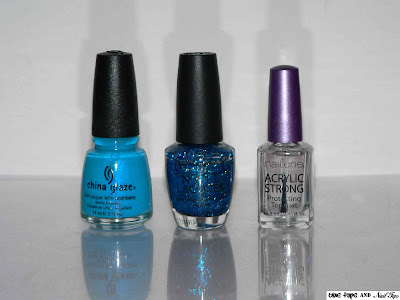 For this design, I chose China Glaze Towel Boy Toy as a base color. I really like the subtle shimmer this polish has, and because it is a neon it dries matte, so you can tell when it's dry - which works perfect for layering nail art on top of it.

The glitter polish I used for the overlaying Starburst Rays is Absolutely Alice by OPI. A bit hard to find now (or way too expensive online to want to consider), so OPI's Simmer & Shimmer would probably work similarly. If you want a similar look, go for a dense glitter that is made up of smaller sized glitter particles. If you want to try a different look, Deborah Lippmann's Across the Universe might be interesting to use (and cute for the name - you know, 'Universe' in a 'Starburst' mani?). Feel free to play around with layering options!

And finally, you'll need a clear polish (and some rhinestones). The clear polish will be used to set the star jewels on each nail.

Step 1 is simply painting the base color you have chosen. If you are in a rush or your base polish is more slower drying, you might want to put a quick-drying top coat over this layer to speed up the process. 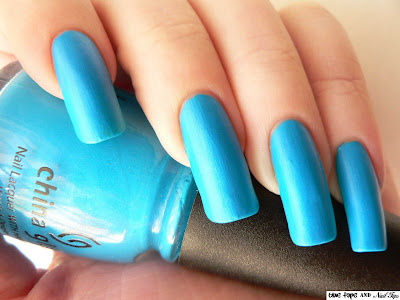 Here is two coats of Towel Boy Toy. This polish dried relatively quickly, and as previously mentioned, it was easy to see when the polish was dry enough to move onto the next step because when dry the finish on this polish was matte. 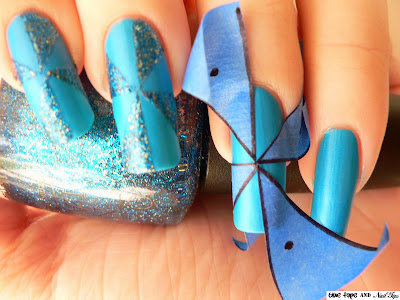 Step 2 is only a bit complicated. What you want to do is cut a square (or 10 - one for each nail) from your roll of blue painter's tape.

On each square, using a straight edge of some type, connect the corners, and then draw a cross through the square. This should total 4 separate lines you've had to draw. Then on every other triangle you've created within your square (there are 8 small triangles total), place a dot or some kind of marker to show that every other triangle has been marked.

Then cut on the line creating the eight smaller triangles. 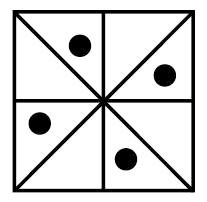 What you will be doing is using the marked triangles to recreate the same shape on your nail without the blank triangles - which is where the second color of nail polish (or glitter) will go on the nail. You are only using four triangles out of each of the eight that will be cut.

*Note: It helps to cut the triangles out and then lay them down on a notecard or magazine (some surface that gives you enough space and that you don't mind sticking tape onto), in the square shape they were originally in before you cut them up, so you know exactly where to place each triangle on your nail.

Whew! Step 2 is complete, and now all you have to do is add the decals in the center of your nails. I used star jewels I picked up at my local beauty supply store, but if you have star shaped glitter or just a round diamond-type gem that works too. The point is to cover up the center where the Sunburst Rays originate from because it covers any gaps between your second color of polish (the glitter polish). 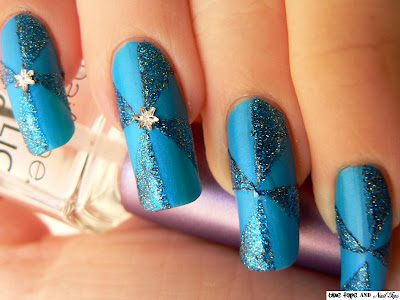 So, simply place a dot of your clear polish at the center point where all the Starburst Rays meet and lay the star down in the still-wet clear polish. For Step 3, you do not have to wait until Step 2 is completely dry. Adding the jewel will make no difference.

Step 4 is simply adding a top coat. This step is more important if you have used gemstones of any type that are 3-dimensional because they can snag on things and tend to not stay on very long unless you put a top coat layer over the whole design to seal it all in. 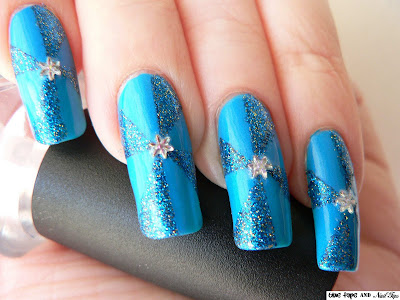 Tah-Dah! You've now completed the Starburst manicure look. What do you think? Would you wear this design? I actually wore this to a birthday party during the summer. It was something fun and bright for a summer bash, but I think you could rock this manicure any time of the year!

Feel free to let me know if you try this design or have tried something similar. I hope ND6 and 7 have given you ideas for using glitter polishes and decals. With this holiday season coming up there are so many great glitter polishes out, I could see making alternating red and green starbursts over a simple silver background with a Christmas Tree decal or something similar at the center point. What about you?
Posted by Cyan at 6:38 PM