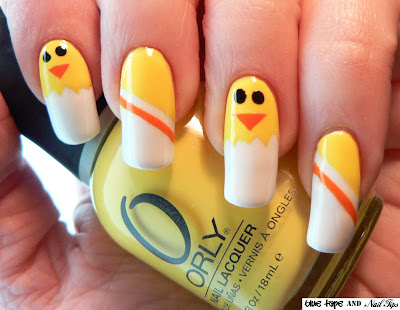 I thought I'd do something Easter inspired for a nail design. Not eggsactly egg-inspired, but quite close. 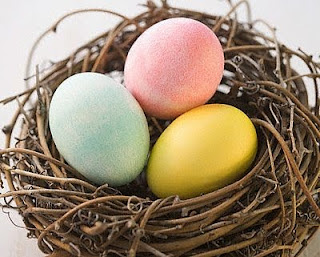 I wanted to use light colors, keeping Spring and all its light and bright it brings to mind. From left to right, I used Tattoo You Want Candy? by OPI, Sun Kissed by Sally Hansen, Spark by Orly, I Love Mummy by OPI, and Witch Arm? by OPI. (Note: The mini OPI polishes are from the Tattoo Ta-Boo Halloween Kit from October 2009. These polishes are said to be comparable to actual OPI colors - like I Love Mummy being the same shade, consistency, and quality as Alpine Snow.) 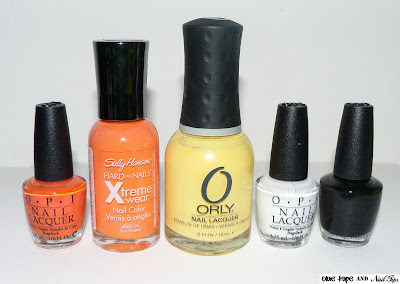 Step 1 was a complete coat of a creme white polish. Because it was the tops of the nails that were going to be layered over in other colors, the white polish did not have to be painted all the way to the beginning top of the nail. 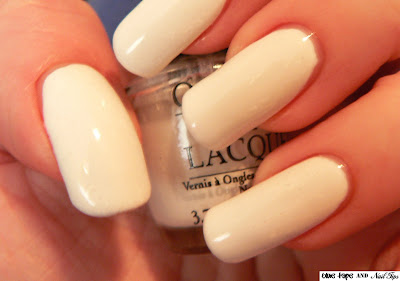 Step 2 begins the use of blue tape. The size of the small strip of tape that is layered over the white first, is the one in which size matters, since that piece is meant to divide between the painting of the yellow and orange polishes. 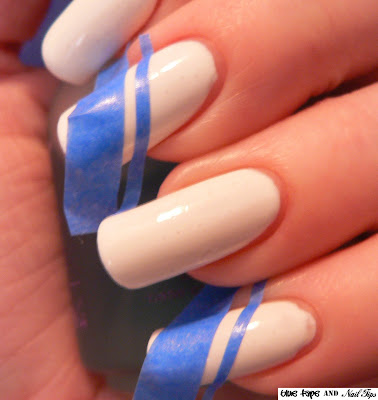 For Step 3, after the yellow and orange stripes have been laid down on the thumb, middle, and pinky fingers, the tape for the design on the index and ring finger must be cut. To achieve the zig-zag/wavy line that looks like a cracked egg shell design, pinking sheers (craft scissors) can be used. If you do not have craft scissors, you can draw a wavy line on a piece of paper or cardstock, adhereing a piece of painter's tape to the other side, then cutting along the wavy line (which is what I did).

After the tape is placed on the bottom-half of the nail with the wavy edge facing up, the yellow polish is layered onto the top of the nail.

Step 4 consisted of adding the detailing to the image of the baby chick for a face, on both the index and ring fingers. First, a triangle was made using small strips of tape to mask off the area of the beak, then the tape was pulled away, and the polish brush from the bottle was used to dot on two eyes. 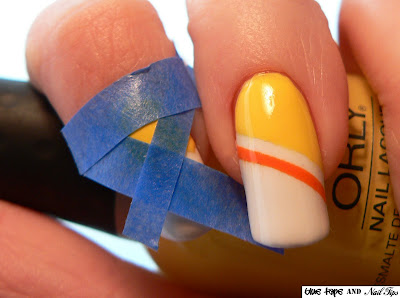 So the final product is as follows: 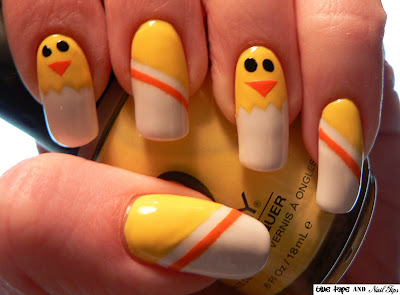 An alternating pattern of stripes and baby chicks in bright/pastel shades to represent both Easter and Spring.


The little baby chick was inspired by a nail design I saw on the nail blog Katrina's Nail Blog. Check out the design HERE to see my inspiration.


Thanks for looking at my Easter nail design. Bye for now.
Posted by Cyan at 11:36 PM