Nail Design Number Nine is Mermaid Tails and Fish Scales...or Mermaid Scales and Fish Tails...or even Tales. Either way this is a design reminiscent of both those scaly creatures. 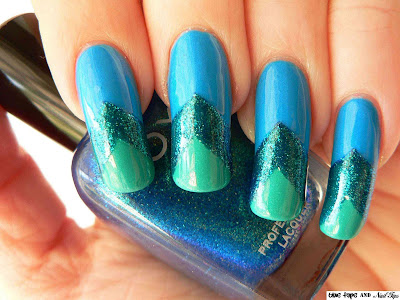 The Little Mermaid Statue in Copenhagen. 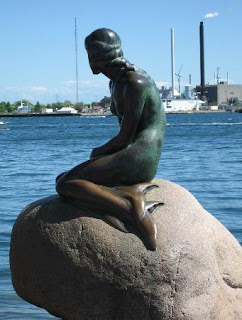 image from womenandclimatechange.blogspot.com
And the players for this Nailish Masquerade: 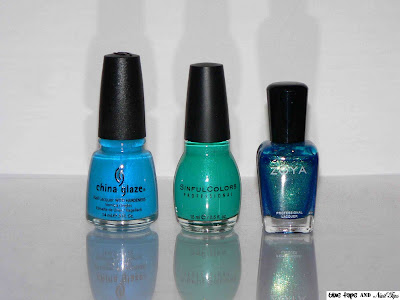 China Glaze's Towel Boy Toy. A neon polish with a hint of shimmer. The perfect polish to layer over because it dries matte (and thus, you'll know exactly when it is dry).

Sinful Colors Rise and Shine. A green polish that is quite similar in nature to Towel Boy Toy, as it has a hint of shimmer to it and dries to a matte-like finish. This polish is a really great find, in my opinion, because at $2US you could wear this polish alone with two coats and have complete coverage with a finish similar to more expensive brands.

Zoya Charla. This is the polish that really makes this manicure design! Like a mermaid in a bottle, this polish is a beautiful combination of blue/green flakes that shine different shades of each color depending on the lighting. While I'd say you need to run and get this while you still can for its extraordinarily beautiful properties, if you cannot get your hands on this Zoya polish, OPI has one that is quite similar...as does Orly...and Essence.

Step 1 is simply laying down the first color of polish. 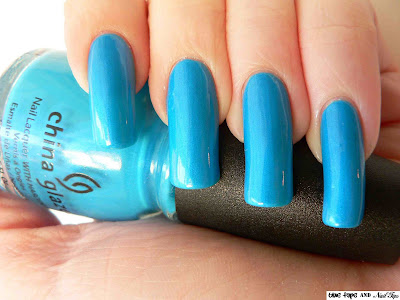 This is two coats of Towel Boy Toy by China Glaze. But don't be fooled - that shiny finish you see in the photo was not a result of fast photo taking before the polish dried, I added a coat of Seche Vite Top Coat before I started the next step.

And here is where the blue painter's tape comes in! 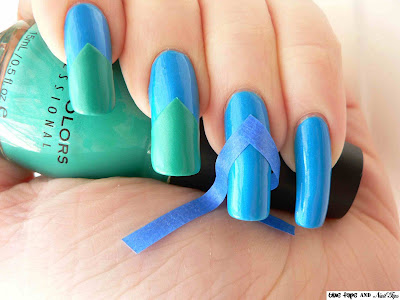 For each nail you will need to cut two relatively straight pieces of painter's tape. The width of each stripe does not matter, what matters is the angle of each cut. You need to be cautious when cutting each strip of tape that you don't inadvertently cut the strip of tape so that it is no longer parallel to the other edge.

Now once you get the hang of step two, we can move on to Step 3. You will be using a total of 4 pieces of tape for this part. 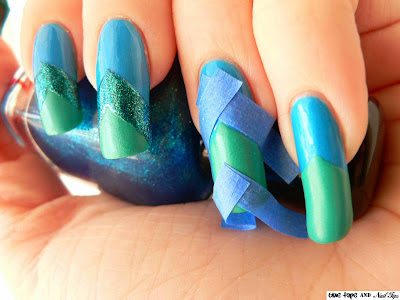 What we are doing here is creating an arrow-point look with Charla, so you are going to begin this step by laying down first one strip of tape right where the green polish meets the blue polish (I started with the right side), and then on the other side of the chevron tip created by the green polish you are going to lay down another piece of tape that will section off that side (my left side shown in the picture above), so that on each side when we paint over the green it will just be barely touching the blue polish, and thus leave us with a more blended-type look between the three separate shades of polish.

Next, we will be repeating the same pattern as Step 2, where we will be creating a 90 degree angle with two strips of tape, and this will go at the bottom edge of the nail to create the other side of the arrow that we will fill in with our third color of polish.

And there we have the final look! Just add a top coat and you are good to go!

On another note, I consider the Zoya polish a glitter polish because it has glitter polish like qualities (such as the fact that it was a pain to remove), so be aware with one of these polishes with this type of finish, you may have to put some effort into completely removing this look - so feel free to wear it for a few days longer than normal!

Well, I hope you were inspired by this twist on a chevron-tip design. Have you tried something like this before? Do you adore the mermaid colored polish as much as I do? Let me know your thoughts....
Posted by Cyan at 11:26 PM