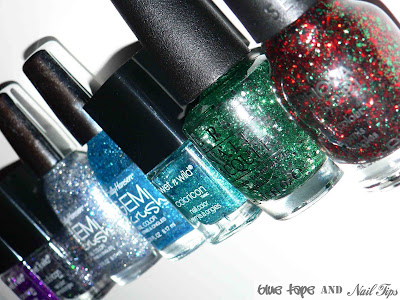 This holiday season many companies - many more than last year - came out with glitter polishes. Most are limited edition polishes, so they are only available while there are still bottles left, and after that they can only be found on internet sites (usually marked up in price).

On to the swatches: 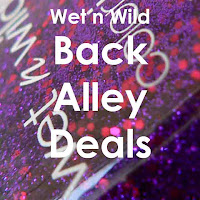 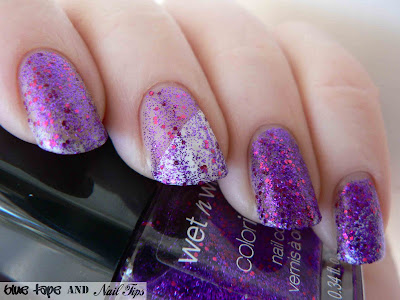 On the index and middle fingers is a single layer of Back Alley Deals, with the right-most nails having two layers. Every other finger also has a half-coat of OPI Alpine Snow - Matte so you can see a bit more clearly how two coats doesn't give complete coverage because the white polish still shines through the purple glitter.

Back Alley Deals consists of fine violet glitter with less magenta hexagonal glitter pieces in a clear base. 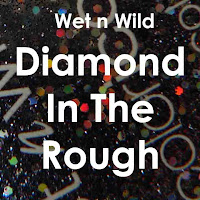 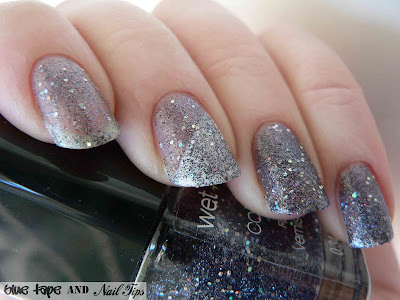 Fine silvery-black glitter with larger, sparser hexagonal glitter that is silver but shines multi-colored in a clear base. 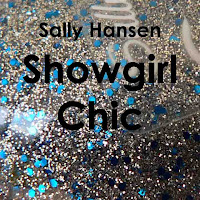 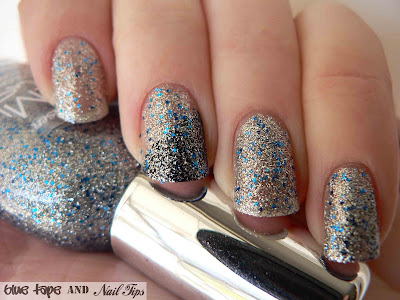 This is one of the denser glitter polishes out of the many glitter polishes available. A dupe to Lorelei's Tiara by China Glaze, Showgirl Chic is made up of small silver glitter with larger blue hexagonal pieces of glitter spread throughout in a clear base. 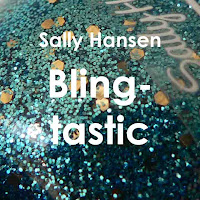 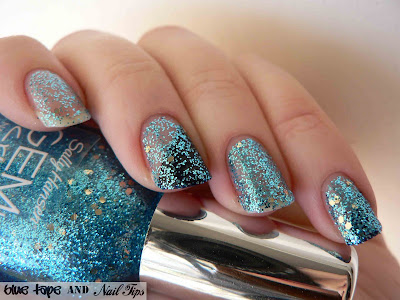 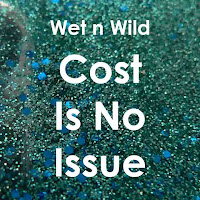 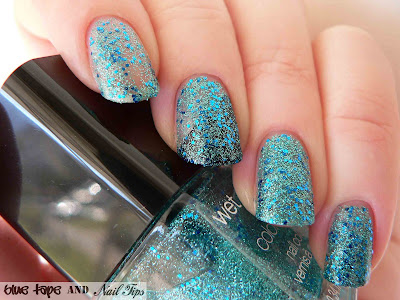 Cost is No Issue is made up of fine turquoise glitter with larger blue/teal glitter in a clear base. This one almost covered completely in two coats. 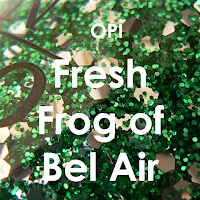 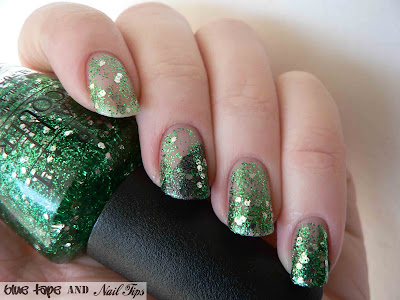 Fresh Frog of Bel Air is made up of small green glitter with larger hexagonal pieces of glitter in silver, all in a clear base. This did not cover fully in two coats. 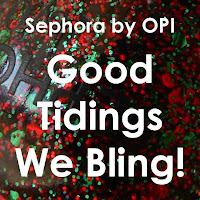 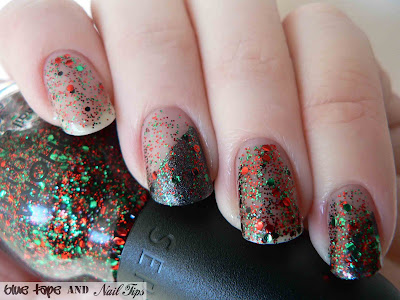 One coat on left two nails, two coats on right two nails. Alternating half-coat of base color in OPI - Suzi Skis in the Pyrenees (Suede).


And now for some comparisons:

First we have Wet and Wild Diamond in the Rough versus Sephora by OPI If You've Got It, Haunt It. 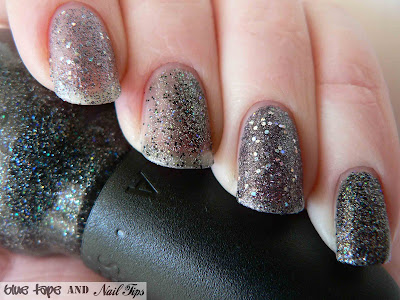 Following the same one coat then two coat pattern, the one coat on the left-most fingernails exemplify how these two polishes are different. On the index and ring fingernails is Diamond in the Rough and If You've Got It, Haunt It is on the other two. Since Diamond in the Rough seems to be a dupe for Some Like It Haute by China Glaze and Dancing in the Dark by Deborah Lippmann and Sloane Square by Nails Inc, I thought it'd be a good comparison polish to the SOPI since If You've Got It, Haunt It used to be only available from the Halloween 2010 collection from Sephora, and the other colors were mentioned as being possible dupes to the SOPI.

In the above picture, you can see that If You've Got It, Haunt It differs from Diamond in the Rough with having the same fine black/silver glitter, but with just slightly bigger black glitter and equally big silver glitter that only flashes blue and green (with very slight orange/red flashes at some angles) in a black-tinted base. For some reason, this combination makes this glitter layer more completely, so that two coats of the SOPI are all you'll need, while the Wet and Wild could use a third coat. 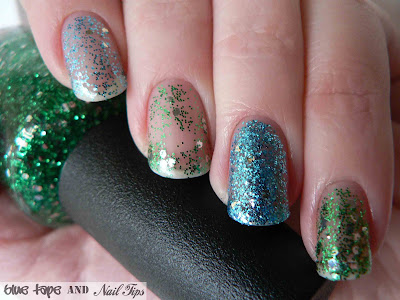 The main differences between the two seem to be that Bling-tastic is more dense, wile Fresh Frog of Bel Air has more silver glitter per brush-stroke. Both small glitters and larger hexagonal glitter is the same size between both polishes.


If you're in the market for glitter polish, the Wet and Wild Ice Baby limited edition collection has nice dupes to more expensive glitter polishes that look exactly the same (the three polishes I showed look awfully similar to the Dance Music trio Deborah Lippmann just released). Out of all the polishes swatched above, I found the Sephora by OPI to have the easiest brush to hold and polish with. The Wet and Wild were the most awkward to polish with because of the short square handle. Bling-tastic and Fresh Frog of Bel Air were the least dense and would need at least three coats to be opaque, while Cost is No Issue and Showgirl Chic are dense enough to be worn at just two coats. Price wise, the Wet and Wild were the cheapest and the Sephora by OPI (which is only available online) is the most expensive, but the OPI and Sally Hansen were both about the same cost (which makes the Sally Hansen seem expensive for a drugstore polish).

If you're still looking, the fact that there are many dupes within the different Holiday glitter collections from the different polish labels makes it easier to find what you are looking for.


I hope you found these swatches helpful and that you've already stocked up on glitter polishes for the coming winter since the spring polishes are already showing up! Thanks for stopping by!
Posted by Cyan at 5:36 PM