Days 5 and 6 of the Condensed Twelve Days of Christmas manicure marathon is a simple Christmas Lights look. 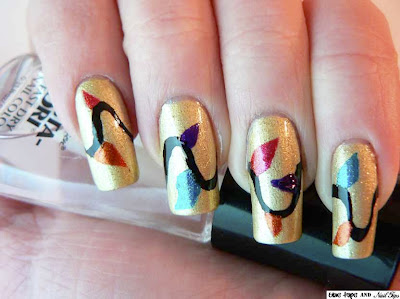 Do you put up Christmas lights? I confess, I have an artificial Christmas tree that already has lights on it (built in), so I never have to worry about stringing the lights around the tree after having to set up the tree itself. Less stress...more time to paint nails. 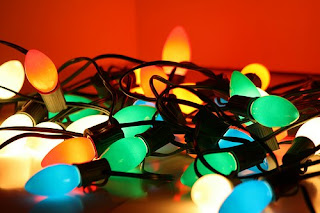 For the actual Christmas light bulbs of this design, I decided to incorporate some of those glass-fleck polishes we've see often this past year. They reflect light nicely, so it's almost like having an actual bulb on your nails when you're looking at your nails in an illuminated atmosphere. 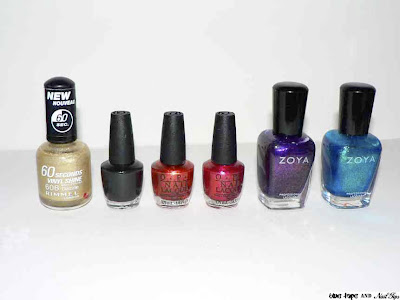 From left to right: Rimmel in 606 Dazzle, OPI in Obscurity (from the 2010 Halloween mini set), OPI in Take the Stage, OPI in The Show Must Go On!, Zoya in Mimi, and Zoya in Charla

Step 1 is laying down the base color. I chose a soft gold shade with small glitter particles in it that I thought would make a nice festive background for the lights. 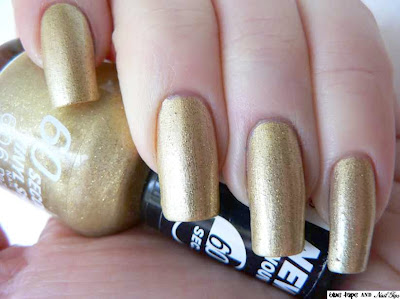 If you want to keep with the glitter-flecked theme (like the polishes for the bulbs), a background of a shade like Orly Winter Wonderland would work nice and would work well to layer over since it is white.

Step 2 is where the blue painter's tape comes in. Although I did not take a picture of the actual tape, the idea is fairly straight forward: 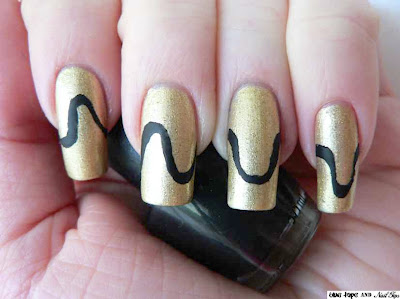 Taking a strip of painter's tape from the roll that is at least 2 inches in length, using a permanent marker, draw a wavy line down the middle of the tape from one cut end to the other (rather than top to bottom).


I didn't take a picture of the actual tape on my nails because this step will differ a bit for each nail length. The longer the nails, the more height you want your curves to have. Once you've decided on a height pattern and drawn it onto the tape, cut along the line you have just drawn. You will need both pieces of tape, wherein you will use each half of the the original piece to mark off the top and bottom of the wavy "light cord". Cut both pieces of tape together in chunks (from the whole piece you've drawn and cut) that span wide enough to cover the whole nail straight across. This will leave you with five separate sets of top and bottom pieces for each nail on one hand.

Once you have painted on your wavy "light cord" in Step 2, you can move on to Step 3.


On a new piece of painter's tape cut from the roll, draw little light bulb shapes at the edge of the tape, so the bottom of each bulb touches the bottom of the tape. You will use these shapes to fill in on the nail, by placing each bulb shape with the open end against a curve in your wavy cord, and then close the form by adding a single newly cut strip of blue painter's tape, so no nail polish seeps where it was not wanted. 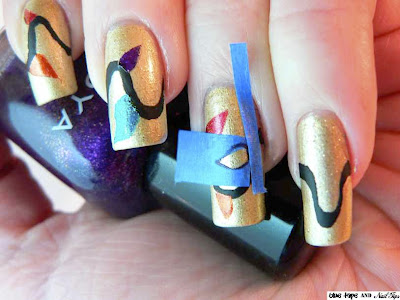 And after adding top coat, here is the final look.

The only thing I wouldn't recommend is using a matte polish for the light bulb cord (the black wavy line) like I did, because the lines were more rough than they would have been had I used a regular black polish (that dries at a regular speed).


This is a fun look that everyone can try at least once (even if it's just to then decide this look isn't for you). It's bright and cheery just like Holiday lights are.


This concludes Days 5 and 6 of the Twelve Days of Christmas.


On the fifth day of Christmas my true love gave to me
FIVE GOLDEN RINGS
four calling birds
three french hens
two turtle doves
and a partridge in a pear tree.

On the sixth day of Christmas my true love gave to me
six geese a laying
FIVE GOLDEN RINGS
four calling birds
three french hens
two turtle doves
and a partridge in a pear tree.
Posted by Cyan at 12:03 AM