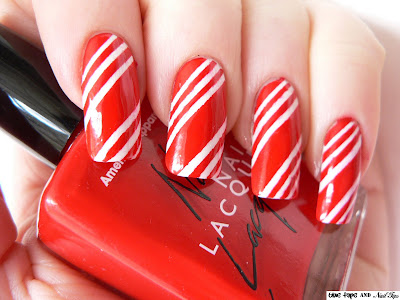 In keeping with the Holiday spirit, I have condensed the Twelve Days of Christmas into six days, where each day there will be a different nail design, up until Christmas Day. 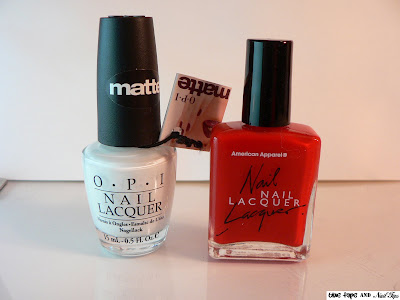 Paint on your base coat color. For the candy cane stripes, it makes it easier if you paint the white layer on before the red layer, rather than trying to layer white over red. 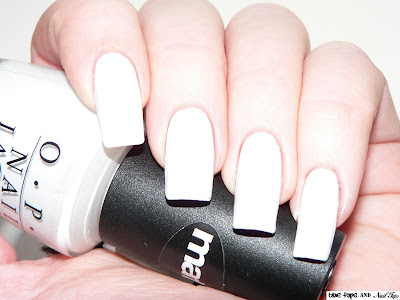 I used a matte white because of its quick drying time, and the stark whiteness of Alpine Snow Matte, to better contrast the bright red polish I am layering on top.

For Step 2, using your scissors or an X-acto knife, cut very thin strips of blue painter's tape, trying to keep each strip relatively even to all the rest. 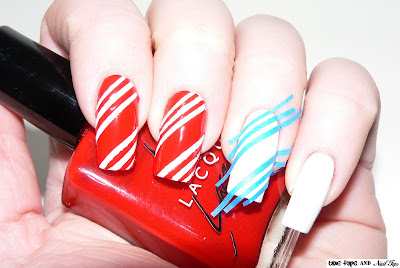 One the nail, lay down the tape strips so that the white/negative space inbetween the tape will represent where the red polish will be. The idea is to have a repeating pattern of one large red stripe surrounded by two smaller red stripes on both sides of the large stripe.

Depending on how long your nails are, you can repeat this pattern up and down the length of each nail to have a complete candy cane effect.

Paint the red nail polish following the length of the tape to get an even coverage. It is fine to completely cover the nail (with the tape on) in the red polish, just as long as you make sure to press down firmly on all tape strips so there are no gaps where polish can squeeze under. When pealing off the tape, make sure to do so right after painting, removing the tape by pulling it in the same direction in which it is on the nail. 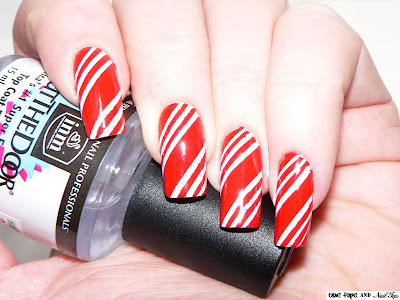 I did not wait long enough after painting my layer of red polish, so I had a bit of streaking where the red overlaps the white, but this will not be a problem if you give your second layer of polish (the red layer) enough time to dry. Rather, while you can sometimes layer top coat over polish that is a bit dry to speed up the drying process, here I would recommend to wait until the second layer is completely dry before adding a top coat.

Days 1 and 2 of Christmas are complete! I hope you've enjoyed this Candy Cane look. Feel free to experiment with the size of striping, the number of stripes, the colors used for your candy cane stripes, or anything else you feel like trying.

On the first day of Christmas my true love gave to me,
a partridge in a pear tree.

On the second day of Christmas my true love gave to me
two turtle doves
and a partridge in a pear tree.